I’ve been listening to a lot of books lately.

Because I’m such a skinflint bargain hunter, I almost never pay full price for anything, and pounce on free stuff with the ferocity of a starving lion. In fact, I’m the sort of idiot who will sometimes harvest cut-price goodies and freebies irrespective of whether or not they’re of any use to me. Behold, the Rio DVD I nabbed for free via the Sky Store last year which remains unwatched by my utterly uninterested children! Toward the end of 2015, however, I had a bit of a serendipitous chain reaction. Amazon ran one of their free Prime trials, giving me access to free one-day delivery for various birthday and Christmas presents (as well as their slightly rubbish streaming video service, and less rubbish streaming/download music service). During the same time period, I stumbled across a free three-month Audible membership trial available exclusively to Prime members. Yoink!

For the benefit of those unaware of what Audible is or how it works, it’s basically Amazon’s digital audiobook store. For a monthly fee, however, you can be an Audible ‘member’. Members get access to discounts, but they also get one credit per month. Each credit can be exchanged for absolutely any book in the virtual store. So I got myself three free audiobooks, albeit spread out across three months. I’m not being sponsored by Amazon or anything, by the way; but if any Amazon reps are reading and wish to send me vouchers, I suppose I’ll take ’em. It would be impolite not to.

So. Anyway. I was faced with a kind of kid in a candy shop situation with my first credit. I could have absolutely anything I wanted, but just one thing – and then I’d have to wait a month until the next one. What to choose, what to choose? I already had an account and a few audiobooks in the bank (combination of freebies and another trial from a few years back, natch) but hadn’t downloaded anything for quite a while. Then, I noticed that – of course – Audible had the audiobook of The Shepherd’s Crown.

At that point, I still hadn’t bought the final, posthumously-published Discworld novel. This was partly because I planned to re-read the other Tiffany Aching books first, as my brain has a slightly terrifying habit of vaporising most details from the majority of books that I read. It was also partly because I simply don’t have the free time that I once did; I’m not a spotty teenager anymore. I’m a spotty adult now, with a family and a full-time job. This means that my time at home has been knocked down from what it was in the twentieth century, and what time I do have is filled with important tasks (such as playing Fallout 4 and watching Studio Ghibli movies). I don’t read nearly as much as I used to. An audiobook though… that I could listen to a little at a time on a daily basis, on the way to work in the mornings. I really wanted The Shepherd’s Crown, and this seemed like a perfect solution which hadn’t previously occurred to me. Yet I hesitated.

I’d already read all the other Discworld novels – read. I’d never bought (or swiped for free) a Terry Pratchett audiobook. Finishing off the Discworld saga in a different format seemed kind of off-kilter, kind of… wrong. At the forefront of my mind, though, was an irrational fear that absorbing this novel in audio form would be a betrayal of some kind. I wasn’t quite sure of what – the unbroken chain of physical books, the memory of Sir Terry Pratchett, the ineffable process of reading words which transform into a world inside your head – but most definitely a betrayal.

Countering that, however, is the fact that the book was read by Tony Robinson. Not only did he play an integral part in one of the most important comedies Britain has thus far produced (“I have a cunning plan!”), but he has a track record of recording Pratchett books, and was even fortunate enough to count Sir Terry among his friends. I can’t imagine how it felt for him, walking into the studio for the first time to start recording the final Discworld novel. So, I made the purchase and the download. It was only after this that I realised the product description contained one of my least favourite words in the English language, antithetical to my life philosophy – “abridged” – but that is a rant for another time.

I listened. I enjoyed. I didn’t want it to end, but of course it did. I felt great sadness listening to the afterword, emphasising the brutal truth that Sir Terry really is gone (his human form, at least) and that The Shepherd’s Crown really is the final Discworld novel. There was even an open, honest, and necessary admission that this version of the book isn’t quite the same one that would have been published had Sir Terry lived long enough to give it his final, personal polish. Such was his talent, however, that what might be considered a four-fifths-finished draft still comes across as complete and impossible to sharpen.

The same sort of appreciation I would have had, I imagine, had I read it rather than listened to it.

I’ve also come to realise that when it comes to stories, considering text superior to audio is unpleasantly elitist under any circumstances. They both have advantages that the other cannot touch, but both are equally important. One might even argue that the telling of stories is more important than the reading and writing of them. Quite apart from the fact that a world without spoken stories would entirely exclude the blind, it would also instantly render storytelling the exclusive preserve of the literate and, therefore, the richest and most fortunate. A chilling thought indeed.

A well-read story can also add an extra layer to an already well-written piece. What I’m currently listening to (and may finally be approaching the end of) is The Bazaar of Bad Dreams, a pretty epic collection of Stephen King short stories. The quality varies (inevitable when you get so much work by one person together in one place), but two stories have already stood out to me thanks to how they were read. Now, I’m English, and that means that it’s written into my genetic code to not give a flying monkey’s poo about baseball. Nonetheless, I was captivated by the baseball-flavoured tale Blockade Billy, thanks to an outstanding reading by Craig Wasson. King himself reads one of the stories; Tommy. It’s the shortest story in the anthology by several light years, lasting (if I remember rightly) just seven or eight minutes. It would be even less if not read in King’s careful, measured drawl. The main reason this one sticks in my memory is that the story is very strongly informed by his life experiences – even more than his stories often are – and it shows in his voice. Brief though it is, every second of the telling is heavy with nostalgia, pain, and wistfulness by turns. I do not for a second doubt that tears were shed.

I do hope that you’ve bought at least one copy of In Memory, all the profits for which are going to Alzheimer’s Research UK, don’t forget. Now, here’s a bit of behind-the-scenes info for you: Sorin Suciu’s story, Doris, originally had some rather salty language in it. I mention this because, for me, it helped solidify the character of the eponymous Doris. So much so in fact that, before I’d even finished reading the story, I was seized by a strong urge to record myself reading it and send the recording to him to see if I’d brought the characters to life correctly. I didn’t end up doing it – that would’ve been a bit weird, even for me – but I still feel it’s a story that would work superbly read aloud. I suppose another part of the reason I wanted to do it was to try and show off the fact that I can do some accents and silly voices (I do a mean Gollum), but that’s by the by.

On a related note, I was surprised to discover that Steven McKinnon had ‘written’ his story, The Vividarium, entirely by dictation. I would never have guessed that by reading it; and why would I? A good story is a good story regardless of how it was created, or how it is delivered (I don’t think my contribution would work very well read aloud – take from that what you will). Stories were always meant to be told from one person to another in many different ways, and long may that continue. Although I’ve come to terms with this, physical books will always have a special place in my heart; in the same corner as truth, justice, and kebabs. 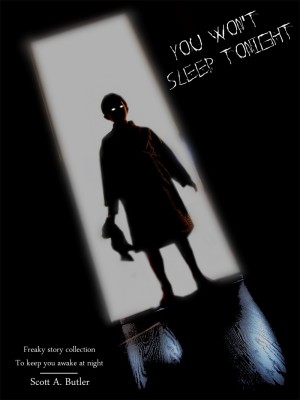 You Won't Sleep Tonight is a collection of ten freaky horror stories which will prey on your primal fears, psychological fears and your weaknesses. This nerve-racking, bone-crunching, fear-paralysis inducing book is a must-have addition to your horror or paranormal bookshelf.